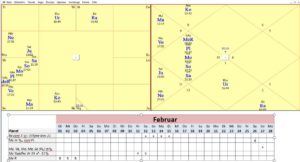 Mercury is still retrograde until 4 February, which could lead to misunderstandings, ambiguities and “loops or curves” in contractual agreements and should be taken into account.

Otherwise Mars and Venus play the main role in February. For about 1 month (11 Feb to 12 March) you remain at war (Yuddha) with each other, beginning in 18 Sagittarius and ending in 11 Capricorn. In both signs Mars is clearly the strongest and puts pressure on all Venusian qualities. We can only hope that the resulting passion is expressed in a level-headed way and does not contribute to intensifying the smouldering power conflicts. I can’t help thinking at this point about the smouldering conflict between Russia and the Nato states. In view of the fact that there is no dramatic ” planetary background music” in the form of violent, rare constellations, this conflict can perhaps be compared to the passionate quarrel of a married couple that flares up again and again and can then be pacified again. The three Saturn-Uranus squares of the last year alone and the renewed rapprochement of the two towards the end of the year could indicate that some kind of re-ordering or re-agreement has to be made, as conditions have changed in recent years.

Then in mid-February the eclipse point on the 3 Taurus/Scorpio axis is also activated by the transiting Moon nodes, which tends to suggest the repeated flaring up of Scorpio issues. We should all practice what Scorpio is least capable of: Letting go. And then we should all be mindful and observe the effects and especially observe the transformational processes that take place within ourselves. They can be incredibly liberating and redeeming!

At the end of February comes the crowning finale: Mars enters Capricorn and meets Pluto there and thus all planets except the lunar nodes are then immediately under Saturn’s rule. We could experience this as a restrictive phase – all the more important to know that the night appears darkest just before dawn!

So it’s going to be an exciting February and on a personal level it would be very helpful to keep confronting our own inner struggles. Only if we manage to face “warlike” attacks without projection and with love and goodwill, can something change on the outside.

People who have the Ascendant, Moon or basically more than one planet in Capricorn will be particularly affected by the February constellations. They should be prepared for many “triggers” and always consciously go to their own centre.